Members of the catering department from the 2nd battalion the Mercian regiment and the 2nd Battalion the Duke of Lancaster’s regiment, were tasked with providing catering support for one of their largest projects the DIY SOS team as done so far, the project was to develop a veterans’ community by bringing empty homes back into use in East Manchester for ex-servicemen and women to come forward to be part of the show.

Nick Knowles, the BBC DIY SOS presenter, said: “DIY SOS team are coming to Manchester to take on the biggest build we’ve ever attempted. The team, and an army of contractors, are doing – up an entire street for veterans.  We’re taking derelict houses and bringing them back into use and regenerating an inner city area.â€

Our task was to provide the catering support for such a mammoth task and we was to set up our Operational field Catering System (OFCS) in a car park a few hundred metres from the build site, the first major tasking we came across was the ordering of food items, as Iceland had kindly agreed to donate £20000 for the duration of the build, with the feeding strength of 300 strong work for every meal, and we know builders can eat, we set about creating menu’s by using the Iceland website, once all the orders were complete, they was submitted to Iceland ready for delivery the day before the project started.

From day one the project just seemed to get bigger and bigger. With the television and radio coverage getting there message out for such a good project, hundreds of volunteers ascended and this tiny street in east Manchester, many of them ex-service men themselves, the days were long but with a good team of chefs we was ready for anything, all of the 300 strong work force were volunteers and relied on the three warm meals a day to get them through the 12 ‘ 16 hour shifts and even some times members were putting in 24 hours shift to ensure the project was completed on time.

The project was a huge success and both catering departments were outstanding from day one, with compliments coming from every member off the BBC staff, this project was a truly great experience for all the military chef’s involved and was a pleasure to meet some wonderful people but most of all it was good to be part of a project so close to our hearts. 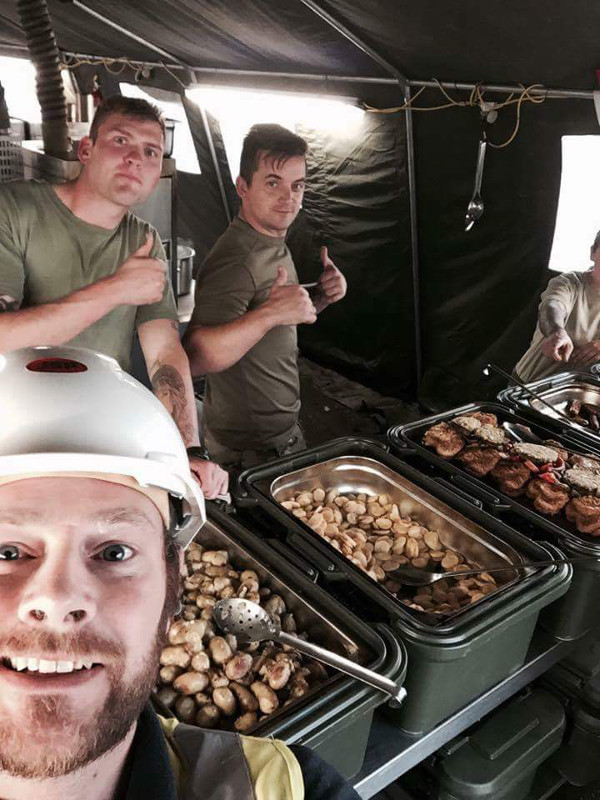 LCpl Collins (2 Mercian) “For the period of two weeks I was working with the BBC DIY SOS team, providing catering support for the DIY SOS team, We were feeding up to 300 people per meal which was busy but the atmosphere was amazing when they came for food as everyone was happy and pleasure to talk too.

Talking to some of the volunteers and hearing the distances they’ve travelled to help out our veterans was amazing as thy came from all over the country like London, Cardiff and even Glasgow to give up their time off work to help out and not get paid is breath-taking.

Working in a field kitchen environment is what we do on exercise but cooking for civilians and showing them what we can do, standing on the hot plate with a sense of pride as they would complement us on how good the food looks and smells.

Pte Wilson (2 Mercian) “In September I was part of a very special project to help rebuild houses for veterans; I helped provide catering support with my department, 2nd battalion the Mercian regiment, and chefs from the second battalion the duke of Lancashire regiment.
We set up a field kitchen on a car park on Norton Street in Manchester for the short period of time i was there; it was a privilege to have taken part on such a big event, as I was not long out of training at the time of the project.

It was such a big project to be involved as I had never done anything like this before on this kind of scale as we was cooking for 300 civilians per meal including the DIY SOS team who were leading the project, while I was there I met so many pleasant people and the compliments we received off everyone about the standards of food that we was producing from a field kitchen, it was my first time since finishing my training using OFCS equipment which was a learning curve for me as I had only used them while I was at Worthy Down”

Fresh off the pitch from Saturday's historic game

Good luck to the Army today.Especially to the pl

A Captain from @UKArmyLogistics has been awarded the QCB for her quick thinking that saved the lives of two swimmers.

🗣️“I realised there were a couple of people in trouble... I said to my wife, I guess I’m going swimming...”

Huge Congratulations to the 14 Royal Logistic Corps Officers and Soldiers who were mentioned on the Operational Honours and Awards list, recognised for bravery, commitment, and commendable service of Armed Forces personnel.

You can see the Army recipients on our website: https://www.army.mod.uk/news-and-events/news/2022/05/bravery-and-compassion-recognised-in-latest-awards-list/

MOD Kineton are hosting an open day on July 9th to commemorate the 100th anniversary of Ammunition Technical Training at the site.The poster below has all of the necessary information.#wearetherlc #wesustain #ukarmylogistics #ato100 ... See MoreSee Less
The Royal Logistic Corps

@BritishArmy is posting images from across its Corps and Regiments that capture the Army's loyal service to Her Majesty The Queen spanning the seven decades of her reign.Images from The RLC and some of its Forming Corps are the first in the series.See the image set here: https://www.army.mod.uk/news-and-events/news/2022/05/queens-platinum-jubilee-royal-logistic-corps/#TheQueen #PlatinumJubilee #BritishArmyLogistics #WeAreTheRLC #RoyalArmyOrdnanceCorps #RoyalCorpsofTransport #armycateringcorps #royalpioneercorp #postalandcourier #royalarmyservicecorps ... See MoreSee Less
The Royal Logistic Corps