Army chefs, stewards and caterers threw down the gauntlet when they took part in this year’s Exercise Joint Caterer at the Defence Capability Centre, Defence Academy, Shrivenham in Wiltshire last month, 13 October 2015.

Now in its 15th year, Exercise Joint Caterer is the Armed Forces’ three day annual flagship cookery competition which sees fierce Inter Service rivalry as up to 500 caterers battle it out for honours in a wide range of culinary skills.

The focus for the event is operational catering and demonstrates the ways in which military caterers can support operational commanders while continuing to contribute to the moral component of fighting power. This is illustrated by the Defence Influence Challenge in which teams compete to produce delicious and nutritious food for 40 people using only the Operational Ration Pack and a standard fresh ration supplement. 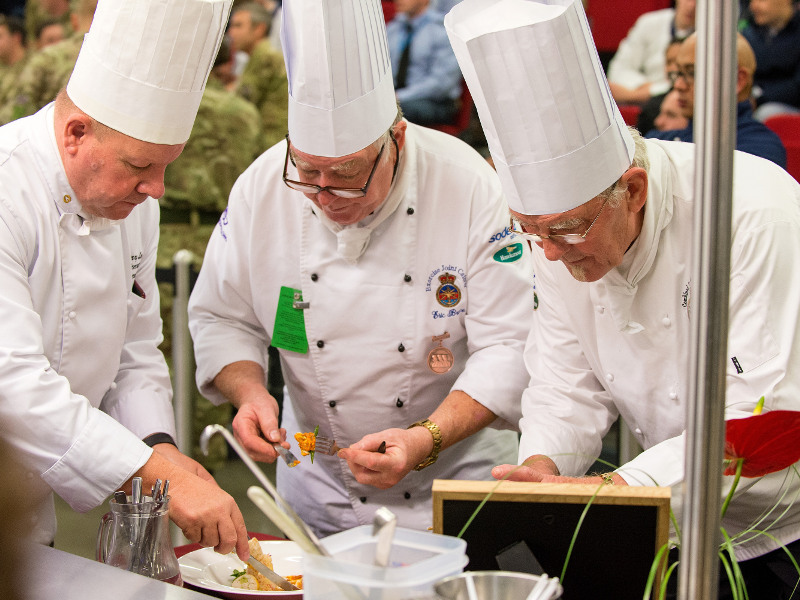 The net was cast wide to find Judges for the contest and their backgrounds range from Tri-service subject matter experts and eminent chefs from hotels and organisations around the country.
Brigadier Andy Brown, Head of Logistic Commodities, said: “Our military caterers are critical enablers on operations, but they are often the unsung heroes. To be ready to support operations requires raw talent, continuous training and a fierce professional desire for excellence.â€

In the months leading up to these three days, the competitors have practiced, tasted, experimented and perfected their dishes in order to be selected to go forward to the competition and on the menu were mouth-watering dishes such as pan roasted venison loin and Chicken Cote D’Azur. Not only were the chefs tested on their skills but were cooking against the clock in several of the classes.
Lieutenant Colonel Nigel Shepherd, Head of Defence Food Services, said: “Exercise Joint Caterer is about allowing chefs from the Navy, Army and Air Force to compete against each other as a way of driving standards ever higher. It is all geared to improving standards on operations. Particularly as you have seen today in the field area, the chefs must prepare dishes under time pressure to transform the ten man ration packs into a superb suite of menus that are unrecognisable from ingredients with which they started.

“The Exercise also provides a unique opportunity for the service personnel to further hone their craft skills, compete at the highest level and demonstrate to the wider military community what a fantastic asset they are.â€ 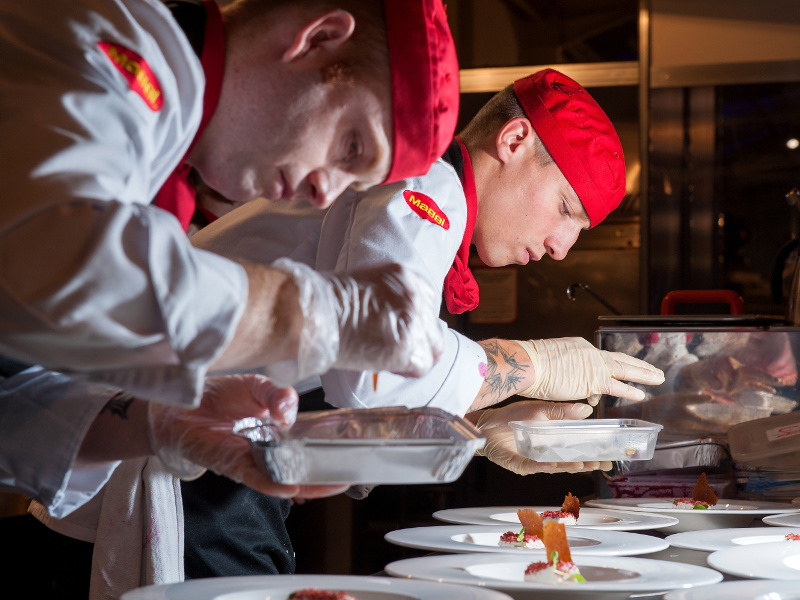 Corporal Narbin Pun, currently serving in Sennelager, Germany with The Queen’s Royal Hussars, took part in the Open Chicken class where he had only 40 minutes to produce a faultless dish. Despite his nerves Narbin was the first to serve his dish and drew on his Nepalese heritage to influence his flavours, using coriander and turmeric. He said:
“This is my first time in the competition. I had been watching my colleagues on the stage since the morning and I was getting more and more nervous as I was last on. When you are last there is a lot of pressure on you. I tried a Nepalese twist and that gave me confidence as I am from Nepal and I can play with spices and I am happy with what I did.

“The event is great, you get so much support. You are competing with the RAF and Navy and it is good to see how they do things. I am very proud to be here.â€