London is one of the most diverse cities in the world, with a population of around 8.6 Million people.

151 Regt RLC recruiting and civil engagement footprints sit predominantly within the Greater London M25 boundary; we also have one squadron located in Warley, Essex and a Troop detachment located in Maidstone, Kent. The Regiment recruits people from a diverse range of social, ethnic and religious groups; representative of today’s modern society. Public understanding of the role of the Army Reserves, determines the climate within which the Regiment can recruit and train. It is also vital for our soldiers, especially when engaged in recruiting operations, to know their local community and the diversity of its people.

Communicating the Army’s messages and recruiting within boroughs which are rich in diversity can be challenging. The Regiment has embraced this challenge positively by deliberately seeking out and engaging with diverse communities. This has been a long term strategy designed to communicate and foster mutual respect, sensitivity and understanding in the community at the same time imbedding a diversity culture within the unit. Initiatives have included visits to Sikh and Hindu Temples, local Mosques and openly engaging with community leaders from all faiths by communicating the Army values and standards. Although a long term strategy, the Regiment is now starting to see the results of this community engagement. Recruiting from within these communities has increased and the Regiments role within the community being more widely recognised and valued.

Staff Sergeant John Rock a member of our Regimental Outreach Team, working in Southall West London, was recently honoured with the Sipora by the local Sikh Community. The Sipora was presented to him by Sant Baba Amar Singh Ji in the presence of a congregation of 10,000 Sikhs at the Guru Nanak Sikh Academy PARKASH 2015 event. The Sipora is a garment of dress bestowed on someone as a mark of honour and acknowledgement of devotion. The honour was awarded for his contribution to serving the Sikh communities. On receiving the award he said “I am extremely proud to be awarded this great honour from the Sikh community. I have been privileged to have the opportunity through our outreach programmes to engage with local communities, gaining understanding and mutual respect by communicating the values and standards of the British Army.â€ 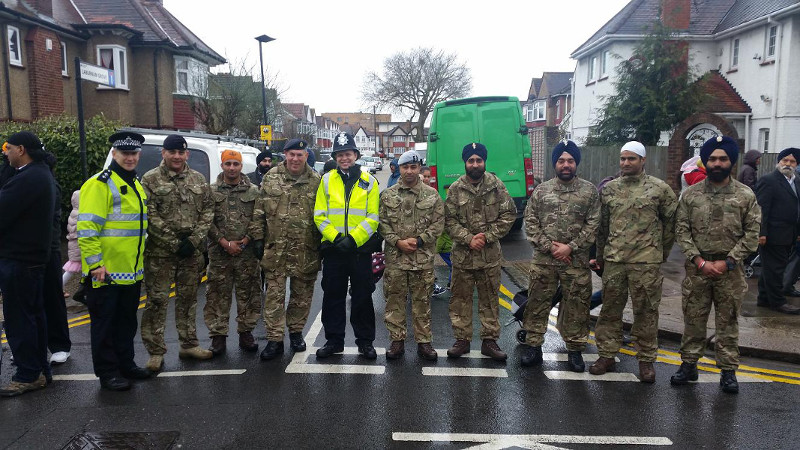