An Army wife made history on Thursday 16 Feb when she handed over control of her Regiment to her Army husband.

Lt Col G Wilkinson handed over command of 154 (Scottish) Regiment Royal Logistic Corps (RLC) to her husband Lt Col A Wilkinson at a ceremony at the Regiment’s headquarters in Dunfermline, Fife.

The couple, who married in 1998, have become the highest ranking couple to follow each other in a command role.

After meeting at university, Lt Col G Wilkinson left the Army to look after family, only to return in 2003. Lt Col A Wilkinson then left the Regulars to join the Reserves.

When asked if he will be asking his wife’s advice on how to run the regiment, Lt Col A Wilkinson said that he will probably ask her as often as she asked him for advice when she took over command.

He added: “But seriously, we do and we have throughout our entire careers asked each other’s advice, it’s very useful, but when I’m in command it’s important to remember that I need to form my own opinion on how things are running.â€

“But I do know that it is a successful regiment and that’s what I hope to continue during my tenure.â€

154 (Scottish) Regiment RLC is the only unit of The RLC based in Scotland. Its role is to provide general transport support for the British Army.

In addition, it is closely linked with 7 Regiment RLC and provides trained manpower to support them in conducting operations around the world. In recent years, it has deployed to Afghanistan and with the United Nations in Cyprus. 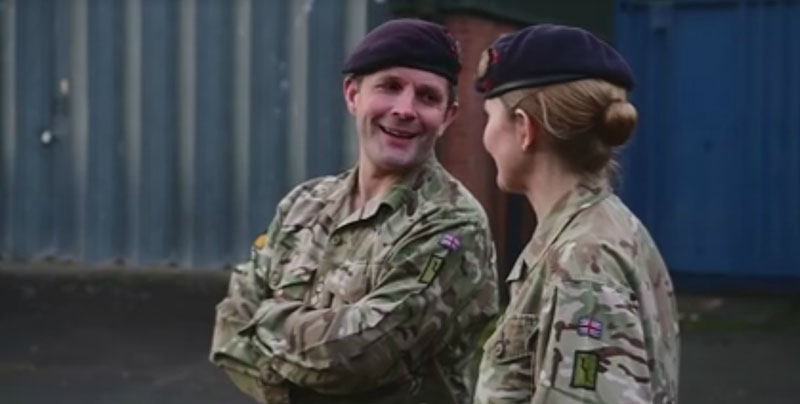 GOLD!!!!!The RLC are always somewhere near the t

But can you wear a daysack at night?You asked th

WO1 (RSM) Steve Muir RLC has now reached a massive

The RLC has won three awards at this year’s Army

It was a pleasure to host Lt Gen Cave, Comd Home Command, to present the ABF @Soldierscharity Carrington Drum plate award to a highly motivated Wolfpack who have raised over £13,900 for our soldiers over the past year 👏🐺@UKArmyLogistics @101_Log_Bde @3rdUKDivision

SSgt Wrangham you are an inspiration, your Corps and your trade are so proud of your achievement 👏 @britisharmychef @ArmyRlc #WeSustain

“…A standout individual; his physical and mental strength is matched with a will to succeed”: Congratulations to #3PARA’s SSgt Wrangham #RLC who has won the prestigious Armed Forces Caterer of the Year; he is one of many outstanding leaders in the Airborne community.

Do you know what Tesco, Babcock, DHL and Pearson TQ all have in common?These four renowned companies are a selection of the ever-growing corporate members of The Royal Logistic Corps Foundation. This fundamental membership provides these companies, amongst several others, with the opportunity to get to know the Army logistics community, gain insights into military leadership and culture and share knowledge across the logistics community of interest.Military logistics capability relies on strong military-commercial relationships and will do so increasingly in the future. The RLC Foundation provides the opportunity for companies to forge connections with The RLC’s greatest asset - its people.It offers the chance to build long-term relationships with Army logisticians and across all RLC trades, and to gain a better insight and understanding of how the Army goes about solving logistics problems and how it looks to industry to leverage its capabilities. For more information on corporate membership, click here: http://rlcfoundation.com/corporate-membership/ #BritishArmyLogistics #WeAreTheRLC ... See MoreSee Less
The Royal Logistic Corps

SSgt Marc Wrangham of 3 PARA has received the ‘Armed Forces Caterer of the Year Award’, winning the title for The RLC and the British Army for the first time since 2010.The Awards aim to identify military caterers who have made outstanding contributions through the delivery of catering services over the past year.Congratulations to all award winners at the event and to all of the extremely talented RLC Chefs who were nominated as part of this year’s celebration.Click the link below to read the full story.#BritishArmyLogistics #WeAreTheRLC #WeSustain ... See MoreSee Less
The Royal Logistic Corps

Between 10 - 31 August 2021, personnel from 7 Regiment RLC deployed across the country to help support the NHS urgent and emergency care system. CAT C Drivers from the Regt were deployed across nine ambulance stations, helping to complete a total of 1,827 patient transfers in support of frontline and patient transport ambulance capability.Click the link below to read the full story.#BritishArmyLogistics #WeAreTheRLC #WeSustain ... See MoreSee Less