As a recent addition to the Logistic Training Development Team based in Deepcut, I was tasked by Maj Den Howard MBE (SO2 Log TDT), to organise a team development day away from the office. It was decided that a visit to Bletchley Park on the 8th May 2016, would also highlight the 70th anniversary of VE Day and renew interest in the events of the Second World War.

Bletchley Park was once one of the world’s best kept secrets and a key part of Britain’s war effort against Germany in WWII. Every detail about the extensive Buckinghamshire estate was shrouded in secrecy to hide the fact that the Enigma code had been broken. As a result of this breakthrough, German Enigma and Lorenz machines could be deciphered and this helped shorten the war by approximately two to four years.

The staff stationed at Bletchley Park which included members of MI6 and the Government Code and Cypher School worked tirelessly to intercept and decode the German communications network. Machines such as the Colossus (the world’s first semi-programmable electronic computer) and the Bombe were devised to keep up with the volume of intercepts.

Alan Turing, who was head of Hut 8, designed the Bombe with Gordon Welchman. This complex electro-mechanical device was commissioned to run through all of the possible Enigma wheel configurations in order to reduce the number of settings in use to a manageable number for further hand testing. Daily operation of the Bombe machines was largely carried out by the WRNS in primitive conditions within Hut 11, dubbed the “Hell-Holeâ€.

The visit to Bletchley Park comprised a pre-booked guided tour of The National Museum of Computing and a self-guided audio tour of Bletchley Park’s main site. The first stop was a tour of the National Museum of Computing Tunny Gallery exhibits where the Bletchley Park’s guide explained the entire WWII code-breaking process from the initial signal intercept to the final decrypt using the Bombe machine in Hut 11. The tour then took in the Colossus Gallery which contained the first fully programmable digital computer of the age. It was also noted throughout the tour that WO2 Citrine (Comms Spec), was becoming more and more excitable every time he could get his hands on the equipment.

The Mansion where Commander Denniston resided who was the first head of the Government Code and Cypher school until 1942, displayed exhibits in the Ballroom which were used during the making of “The Imitation Gameâ€ which was released in 2014, starring Benedict Cumberbach and Keira Knightly. The Ballroom itself was a location where key scenes were filmed.

The groups visited other key locations including Hut 8 where Alan Turing worked and Hut 11, now empty apart from the sound track of the WRNS operating the machinery, long since dismantled offered a realistic experience of what it must have been like to work here during the early 1940s. The museum in Block B, displayed a rebuilt example of the Bombe and the curators carried out a working demonstration which highlighted the complexity of the machine every hour. It was noted also that several comments were made about several of our civilian members of the team, having carried out National Service in buildings very similar to Huts 8 and 11.

The day was informative and enjoyed by all. The exhibits of ‘Britain’s Best Kept Secret’ are dedicated to those men and women who cracked the German WWII communications network, and serve as a constant reminder of what we as a nation owe them. 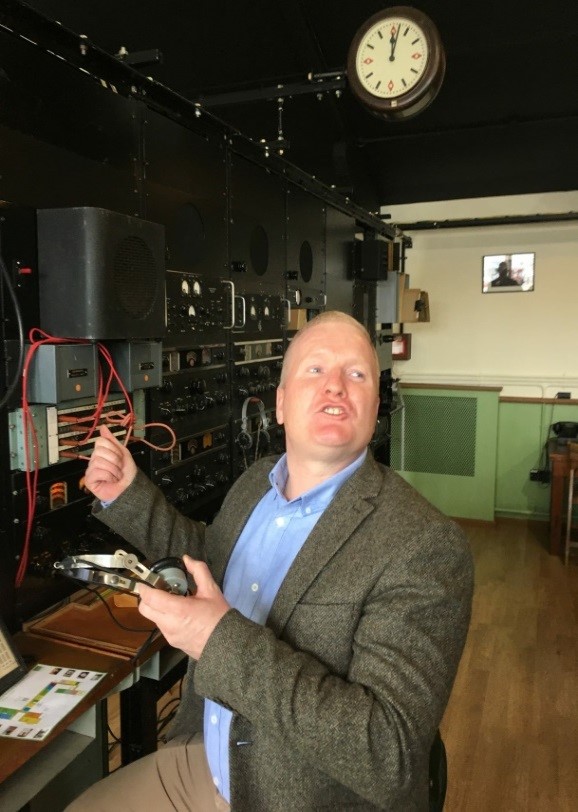 WO2 Citrine (Comm Spec) pictured, demonstrated to the group, how radio traffic would have been intercepted back in the day