It is with great sadness that the RHQ reports the funeral of Pte Sawyer took place yesterday, with members of 4 Regt RLC providing Bearer Party and Firing Party and Brigadier Murray representing the Master General of Logistics. The funeral was held at St Edburgha’s Church, Birmingham and the service was given by Reverend Bill Sands and Padre Patrick Aldred CF. 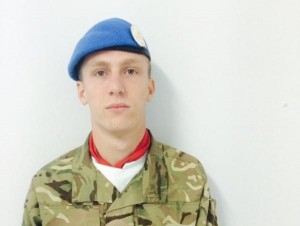 After completing his training Pte Sawyer joined The 2nd Battalion, The Mercian Regiment, based at Dale Barracks, Chester. During his time with the Battalion he conducted several training exercises in the UK and then deployed to Cyprus on a six month Op TOSCA peacekeeping United Nations tour. He was one of a team of twelve Army chefs who supported the Battle Group. It was with great sadness that the Mercian Regiment reported the tragic death of Pte Jamie Sawyer, who died on 12th March 2015 as a result of an adventure training Kayaking accident during his deployment in Cyprus.

Pte Sawyer was a deeply talented young chef; he was extremely popular in his unit and was well known for his sense of humour and camaraderie. A soldier of great promise, in the short time Jamie had been with his unit he made a big impression, and will be remembered for his contagious smile and his compassionate nature. He was a motivated and dedicated young man, whose passion for his job would have seen him excel in his career.

A full military funeral was conducted at St Edburgha’s Church, Birmingham on 8th April 2015 and was attended by members of the RHQ, 2nd Bn Mercian Regt and Food Services Staff. Our thoughts and prayers are with Jamie’s family, he leaves behind his mother, stepfather and younger brother.