Two members of the Corps receive awards from the Worshipful Company of Carmen.

The RLC has a long standing association with the Worshipful Company of Carmen ever since Articles of Association were signed in 1975, to the Royal Corps of Transport. A valued affiliation is still borne to this day, specifically with 19 Tank Transporter Sqn who are known as ‘The Carmen’s Own’.

Soldier of the Year – Lcpl Walford

Every year, an awards ceremony is held in order to honour the best in the world of transport and this year recognised the outstanding service of (selected) LCpl M Walford of 29 Regt, winning the ‘Soldier of the Year’ award. LCpl Walford received the following citation:

(Then) Private M Walford RLC
For unsurpassed impact on unit life and her sporting prowess. RLC young sportswoman and Army Heptathlon Champion 2014, selected for the 2016 British Olympic Girls for Gold programme, she is the Captain of the Regimental boxing team, swims for Army and Corps, selected for Girls for Gold weightlifting and Taekwondo, Corps netball and basketball, won the Army cross-fit team challenge in 2013 and completed the Nijmegan march ‘ 100 miles in four days. Working in Oman, San Diego and Norway she completed the Marines cold weather survival course, served in the ATLO team coordinating formation level movements, completing her Class 2 trade course with 90% marks. Raising charitable funds by running a 12 hour Zumba Beastathon, Cardiff half marathon, and Bromsgrove Poppy Run, she also takes soldiers’ wives Zumba classes, and works with the Bromsgrove Troubled Youths Scheme.
It is fortunate that LCpl Walford returned from a six month deployment on Op KIPION to receive the award, which was presented by Her Royal Highness The Princess Royal (pictured above). 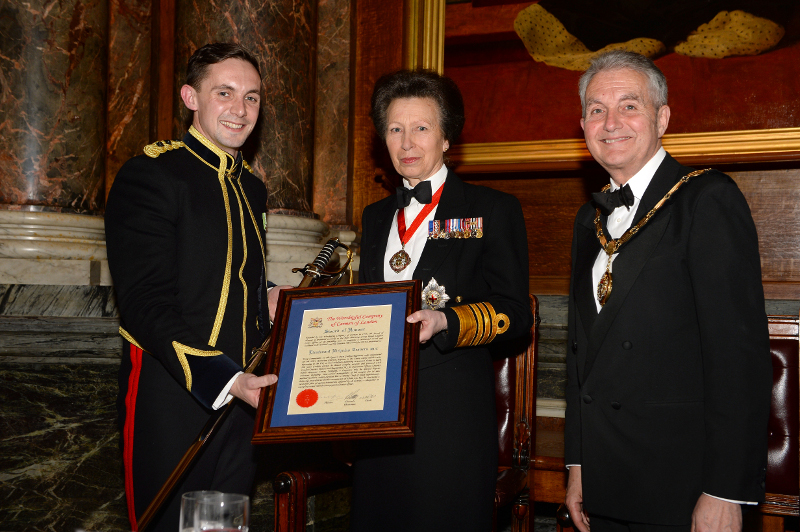 The Worshipful Company of Carmen present the ‘Carmen Sword’ to recognise the best Young RLC Officer, who is judged to be attaining the highest standard during a period of Regimental duty.

Lt N Travers
Lt N Travers joined 10 The Queen’s Own Gurkha Logistic Regiment in January 2014 and following three months of language training in Nepal, he deployed on Op GRITROCK to support the UK’s response to the Ebola crisis in Sierra Leone.  Devising innovative logistic solutions in a rapidly changing environment, his was a high pressure appointment, attracting political interest on a daily basis. The Concept of Operations that he developed proved so successful that it was adopted by all other Sierra Leone districts.  His willingness to get stuck in to all aspects of the mission, working with a variety of local and international stakeholders, and getting his hands dirty whatever the problem, made him a standout performer.
Following this, he returned to the UK to be the lead subaltern for the Regiment to deliver ceremonial duties to mark 200 years of Gurkha service.  Through months of rehearsals, his humour never failed and he was an excellent example to others in his turnout and ceremonial drill. Unrelenting in demanding the best from his team, but compassionate and always with an encouraging word, he calmed nerves when the stakes were high and ensured the sterling reputation of The Royal Logistic Corps was consistently reinforced.  The award was presented by HRH The Princess Royal, at the Company’s Joint Services Dinner in the opulent Drapers Hall in central London (pictured above).