6 soldiers of 7 Regiment RLC recently completed the Mongol Rally ‘ an adventure that starts with a lap of the historic Goodwood racecourse, and finishes in the Siberian town of Ulan-Ude, over 7,000 miles away.

The Rally does not dictate a set route, but instead lets teams get as lost as they want, in as much trouble as they dare, and break down as many times as the vehicles decide. The cars used in the Rally must be completely unsuited to off-road terrain (absolutely no 4x4s), and have an engine size of no more than 1.2l. The 7 Regiment team, Where Eagles Dare, travelled in 2 Suzuki Swifts (combined engine size under 2l), and not only made it to the finish line, but also drove back to their base in Kendrew Barracks afterwards. Mechanical failures were a common feature from the word go, starting with excessive amounts of talcum powder blowing through the fans, and finishing with the scrapping of one of the vehicle’s battery, without replacement! 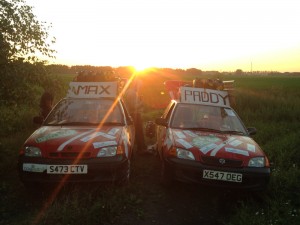 Europe
After an afternoon ferry to Calais, the long slog through the civilised world began. Where Eagles Dare must have looked much more civilian than we thought ‘ German police quickly found the team and instigated a drugs search, though after learning that the 2 scrapheap cars in front of them were going to get to Mongolia, they decided we were already crazy enough ‘ and probably had no need for drugs. Mechanical faults were few and far between initially ‘ limited to windscreen wipers falling off on the autobahns, random fault lights and rattlings. The cheap tents bought for the Rally leaked like sieves, but we eventually limped into Latvia, ready to cross into Russia on day 7. 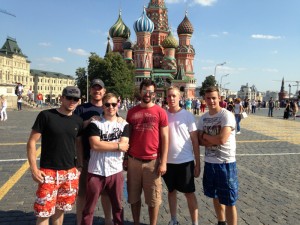 Russia
After losing a day to the border crossing, Where Eagles Dare started their way through the most gargantuan of countries. Only an afternoon could be spared for Moscow ‘ which was enough time to get on to Red Square, visit the famous cathedral and sample some Russian Imperial vodka.

We were dreading the infamous Russian (lack of) hospitality, but were pleasantly surprised by how warmly we were welcomed ‘ the state of the cars endeared us to most who saw them! Just outside the remote town of Chelyabinsk, we spotted the perfect mascot for the team: A 1m tall statue of an eagle, or as we preferred to think of it, an Orzel! After some moving around of stores, there was enough room on the roof of ‘Paddy’ to mount ‘Harriet’ the Orzel, and there she stood proud for the remainder of Rally, braving all weathers and shocks.

The further east we traveled, the more sparse civilization became. In between population centres there were vast plains of nothing, as far as the eye could see. We eventually crossed the Yablonoi mountain range, which was without doubt ‘bear-country’. Coated in a blanket of dense forest, the scenery was stunning and almost uncomprehendingly large ‘ we passed numerous questionable looking ‘breakdown’ situations; all males, all trying extremely hard to wave other cars down. The feeling of being jack lasted less than a second ‘ each broken down car had a second vehicle around the corner, again full of males ‘ ready to take our valuables off our hands.

As we started heading southeast, towns became even more of a rare occurrence, and after treating ourselves to a final steak in Barnaul, we well and truly said goodbye to towns. The roads deteriorated and the terrain got steeper as we entered the Altai mountain range, the last in Russia. The wild nature of the region became yet more evident; approaches by groups of hard-looking blokes with gold teeth demanding money to camp on their ‘territory’ didn’t even raise an eyebrow. We reached the border, and hit a wall rigid bureaucracy. That was Day 16. 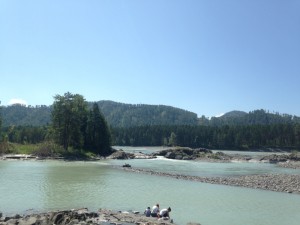 Mongolia
After losing 20 hours to the border, the cars roared into Mongolia. Free of the political sensitivities of Russia, the Regimental flag was hoisted next to Harriet, and the back seat passenger swapped his seat for the roof of the car. The tarmac ended, and gave way to dirt tracks that had an endless ‘wriggly tin’ effect, making driving at anything over 20mph bone-shatteringly uncomfortable. The jerry cans were filled with fuel in Olgiy (the first Mongolian town), and a rudimental tourist map bought to get us across the country. The town, like all in Mongolia, had a disorganised conglomerate of tracks which bled into one, that entered the town, and another that left it. We literally pointed the car at the rising sun, and started driving.

The tracks proved to be unreliable however. Often they would abruptly end with no warning, sometimes a matter of feet before a river crossed the path of the would-be road, sometimes they petered out so we would keep following our path, kidding ourselves that it would begin to look more like a motorway soon. The up-side of the country was that once we had decided we had gone wrong, we could point the car east (determined only by the sun), and start driving crosscountry, cutting our own path!

The ground wrecked the cars from start to finish. Late one evening, our track abruptly ceased and became a river. The river crossing concluded when Paddy had burnt out his clutch, and an Italian journalist who happened to be passing used his 4×4 to drag our sorry cars to the other side. The next day the VMs got to work, and in 4 sun-baked hours, the car had been dismantled, a new
clutch fitted and Paddy was back on the road! In a couple of days, both cars had lost their bumpers, the fuel tanks had been pierced numerous times, a wishbone had been broken off (then welded back together, and then replaced by an improvised wishbone made from bits of metal in the cars), the front end of Paddy had been crumpled, and both cars had mean-looking skulls attached to their grills!

Ulaanbaatar, the capital of Mongolia and the unofficial finish line of the Rally, was spent in relative
luxuryâ€¦AKA a bed. From here, we headed to the Mongolian border with Russia, approximately a
day’s drive northwards. After a night spent fixing yet another fuel leak, and an accidental fire (thanks to Pte Charlesworth and the 20l of fuel he didn’t want), we arrived at the edge of Russia. LCpl Whiston decided the cars were looking too healthy, and reversed into a lamp post, costing Paddy his rear windscreen, and the next day we attempted to cross the border itself. Once into Russia, it was best effort to the finish line in Ulan-Ude, Siberia. 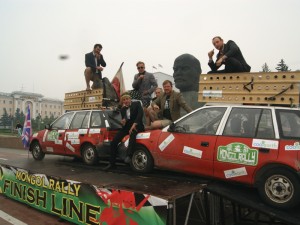 The Finish and Recovery
We rolled into Ulan-Ude, knackered and battered, late at night. We found somewhere to sleep, and waited for the morning when we could bask in our own glory. The finish-line ramp was in front of a huge statue of Lenin’s head, and once both cars were mounted, the victory cigars were lit and the basking began. The plan to start driving straight back lasted as far as the Rally-affiliated pub and their free beer, and another night was lost to Ulan-Ude. The drive back began in earnest the next day, pausing only for a dip in Lake Baikal, home to 20% of the world’s surface freshwater, and from there-on-in, it was nothing but heading for the sunset and the UK. Shortly into the return journey, Paddy’s battery melted; determined to get him home and not let him die on the road side, we push-started him countless times, and finally decided it was time to bin his battery, and rely on electrical jumps. After 4 days of hard driving, 3900 miles were covered and Russia was finally behind us. Following a well-earned rest period, the team smashed over Latvia into Riga, and boarded a boat headed for Stockholm, giving us 15 precious hours of rest, all the while covering plenty of miles! Once successfully jump-started off the ferry, the cars easily covered the drive to Dunkirk, and the final morning leg from Dover to Cottesmore, on 21 Aug, Day 33!